Learn to Play Like Slash To Improve Your Guitar Playing 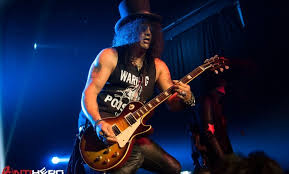 If you like Guns & Roses, learn to play like Slash to improve your guitar playing.  By utilizing his techniques, you’ll get insights into what great guitar playing is.  This will allow you to put these musical concepts into your own song ideas. 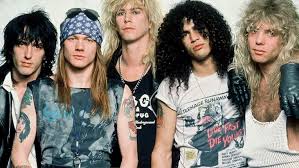 Guns & Roses formed in Los Angeles California in 1985.  They signed with Geffen records in 86 and recorded their first album Appetite For Destruction in 87.

With such guitar staples as Welcome To The Jungle, Sweet Child O’ Mine and Paradise City.  This record and all their others are filled with Slash guitar techniques that are worth taking into consideration when writing your own music.

The tone that Slash uses in his guitar playing is very basic in design.  This is a huge part of his sound.  Basically he plugs a Gibson Les Paul straight into a Marshall amplifier

His guitar tone is pretty bare-bones as they call it.  He doesn’t use a bunch of guitar pedals as most guitar players do.  This can be good for playing rhythm guitar as well as for playing guitar solos.

Effects (wah and delay on jungle)

He does use a couple of weapons of destruction though.  He uses the infamous wah pedal for enhancing his guitar solos and he uses a delay pedal for the intro to Welcome to the Jungle.  This is a great way to start a song and an idea worth thinking about for your own creativity. 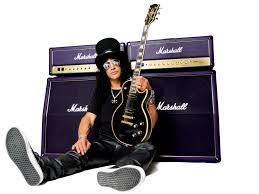 These two guitar pedals are very popular in rock music and can be heard in hundreds of songs by all kinds of great guitar rock bands.  If you play with guitar pedals or interested in playing with them, I recommend you look into these two.

Slash also uses another common technique utilized in rock guitar, he tunes down a 1/2 step to E flat.  This gives the guitar strings a spongier feel and allows for easier bending due to string tension.

This also helps the vocalist with singing in certain ranges.  Especially useful if your on tour playing every night.  This is actually a pretty common practice to help save the singer’s voice.  Another technique to think about doing for your own playing. 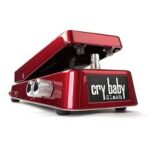 This is a great pedal and even though it was mentioned before, it is worth mentioning again.  Many great guitar players have used the wah pedal to make great guitar tones.  Players such as Jimi Hendrix, Eric Clapton, Jimmy Page, Kirk Hammett, and of course Slash.

When it comes to playing guitar solos and even the opening riff to Sweet Chil O’ Mine, Slash often uses the minor pentatonic scales.  These are very common scales that all great guitar players use and it would be recommended you learn them for yourself. 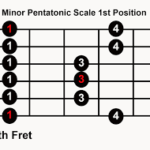 Shown above is the most common guitar scale and the first one to start out with.  It is made up of five notes and as you can see, not to difficult to learn.  This scale can be played over many chord progressions in any key.  You just need to learn where exactly to play it.

The minor pentatonic scale is used in all styles of music.  Blues, Rock, Jazz, Country, Pop, etc.  This scale can be used for playing guitar riffs as well as for playing guitar solos.  So make sure it is part of your guitar repertoire.

Once you learn your guitar scales, you then want to learn how to bring them to life.  This is done with techniques such as hammer-ons, pull-offs, bends, and vibrato. Slash uses these techniques in a glorious effect.

This is when you play a note and hammer on to another one.  A very common technique in guitar playing.  This example is in the A minor pentatonic scale shown above.

As you can see, these are just the opposite of hammer-ons.  You put two fingers down on to notes, pick one note and pull-off to the other.  This example is also written in the pentatonic scale.

Slash uses the guitar effect to the hilt in his playing.  As most lead guitar players do.  If you plan on playing guitar solos, make sure you learn to bend notes.  It provides character, color, and emotion.

When you play a note and vibrate it, this is called vibrato.  This simulates a singer vibrating a note with their vocal cords.  Another very common technique used by Slash and recommended you learn to use it too.

Not only is Slash a great lead guitar player, but he is also a great rhythm guitar player.  He uses funk style and rhythm and blues style rhythms in his songs.  Listen to the rhythm of songs like Its So Easy, Welcome To The Jungle, and Mr. BrownStone.  You’ll hear what I’m talking about.

These are very common chords in guitar playing and recommended that you learn them.  Slash uses these in Sweet Chil O’ Mine.  You can also find chords like this in songs like Patience.

Natural chords like these can help you to express yourself in many different ways.  Learn these along with the other basic chord shapes and start building your guitar chord vocabulary.

These are two note partial guitar chords.  They are also very common in rock guitar playing.  Slash uses these in conjunction with the natural chord types.

These are easy to form, just takes two fingers (a bit of a stretch though) and once you learn to form and move them, you can play all kinds of rock guitar songs.

As you can see, these chord shapes are a bit different than the other two.  They have different names (harmony chords, 3rds, 6ths, etc) but are all the same.

When you form ad play them, you’ll see that they produce a different sound than the natural chords ad the double stops.  This will allow you to create variety in your guitar playing and songwriting.

There are literally tons of guitar chord types you can use, and the more you know, the better variety you will be able to create with.

There are many more things that Slash uses in his playing, but these ideas should get you started.  When it comes to playing guitar, you want to work daily on improving both your rhythm and your lead guitar playing if you want to play like Slash.

Slash has become one of the all-time great guitar heroes due to his dedication to the instrument.  I recommend you follow suit.  Practice daily, have fun and keep learning.  This is where people fall into a rut.  They stop learning.

Learn these concepts and musical techniques as I mention here and use them in your own guitar playing.  Don’t copy Slash, but use his guitar inspiration to fuel your own creativity.

And if you feel you need additional help in these areas, be sure to check out my guitar method books to help you improve your guitar playing.  These can be found on Amazon and in my eBay store.

Also, be sure to visit my website for more information on taking private lessons to help you progress faster by learning with one-on-one instruction.  With the right guitar teacher, you’ll be able to quickly improve on rhythm guitar, learning to play guitar solos, and developing a better understanding of music theory and how it relates to songs.