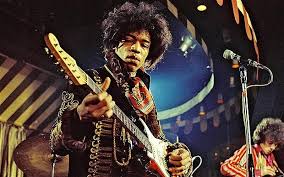 Learn to play like Jimi Hendrix with three different chord types.  This will allow you to play his music, understand his approach and use these chord types in your own songs.

Jimi Hendrix was one of the first guitar wizards. Meaning he was doing things with the guitar that most people hadn’t even thought of yet.  And in doing so, he left his audience in total amazement!

See, you must think about doing something, visualize doing it and then move into action actually physically doing it.  Of course, he might not have been the first to do all the crazy things he did with the guitar, but Jimi Hendrix was definitely the first to bring it to the attention of the masses.

This is a jazz chord and utilizes all fingers.  Quite advanced from using power chords.  Be sure to practice forming this chord to get it to sound clean and ring out with clarity. This can enhance creativity.

Work on getting this chord down as it will be a fundamental building block for future chord shapes you might want to explore. In doing so, learn to switch between chord shapes for maximum efficiency.

This is another chord type that Jimi Hendrix uses in his music.  You simply take your natural F chord shape that you normally play at the first three frets and move it up the fretboard.

Now to be able to do this well you need to try to get your thumb over the top to capture the low E string. This will allow the chord to sound correct as you move it up and down the fretboard.

This is another very common chord type that Jimi Hendrix uses in his music.  You can find this in songs like Purple Haze and Fire just to name a few. This is a very simple chord type.  Use two fingers on two strings with an open or muted string in between.

The notes in this type of chord are played individually like in the intro to Purple Haze or together like in Fire.  Listen to these two songs and you’ll see what I’m talking about.

Jimi Hendrix used many techniques in his music and I would recommend getting some books on his music and watching some videos to learn more about his style and of course listen to his music to fully understand his approach to playing guitar.

Who knows, maybe you’ll learn some techniques you can use in your songs to make people say “Wow, how do he/she do that?” But in order for that to happen, you must be committed to the instrument and develop good practice habits.

And if you haven’t already, be sure to grab my FREE action-guide Rhythm Guitar Secrets for future training tips and tricks to help with your guitar playing.

Best of luck And if you have any questions, feel free to shoot me an email.