Learn The 5 Most Common Guitar Chords For Beginners 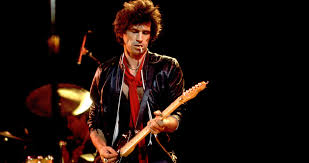 Learn the 5 most common guitar chords for beginners.  These will help you with writing and learning songs as well as build your guitar chords vocabulary.

The 5 most common chords to learn are the C A G E and D chords.  These are often called caged chords.  Because the 5 chords spell out that word.  But not keep things simple in this lesson, we’ll just focus on these 5 chords to get started playing.

When it comes to playing guitar chords on the guitar, there are literally thousands.  But no need to learn that many to start.  The 5 most common guitar chords will be just fine.

To learn this easier, I recommend you learn to read chord diagrams or chord charts as they are sometimes called.  This will help you to visualize how these chords are supposed to look on the fretboard.

Here is a chord diagram: 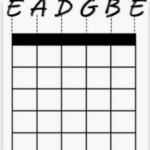 Here we have the same thing as above except we have three dots on three strings.  This tells us where this chord is on the fretboard and how to form it.

This is the D major chord (or D for short) and it is formed on the first three strings (E, B, & G) at the second and third frets.  The numbers below the diagram tell us what fingers to use to form the chord.  Sometimes these numbers will be in the dots themselves.

What is great about these guitar chords, is that they only use three notes.  This provides a nice foundation for building upon later.  When you’re fingers get used to forming and playing these chords, you simply add notes to change them into other chords.

If we look at the notes in the key of C major that the C major chord comes from, we have the notes, C D E F G A B C.  The root note (C) to its octave (same note above it) has 8 notes.

When we give these notes a number, we see that the C would be 1, the D would be 2, the E would be 3, etc.  This lets us know what notes we need to create the C major triad.  We will need the C, E, & G notes.  This works with all major chords.

This works almost the same way.  Same three-note chord formula, except you, flatten the 3rd note by one fret.  With C minor, you now have the chord formula 1, b3, 5.

The notes are the same as the major except for the flattened 3rd.  The notes for the C minor chord are C, Eb, & G. 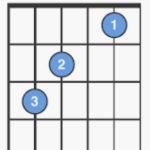 The C major chord is a three-note chord that is built on the 3rd, 2nd, and 1st frets of the fifth, fourth, and second strings.  I like to think of this chord as a slanted chord because the notes follow a slanted line. 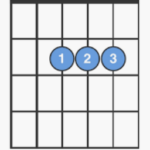 This chord is built off of the fourth, third, second strings.  All notes reside on the 2nd fret.  I call this one a straight line chord because all the notes line up on the same fret. 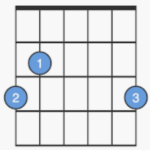 Here we have the G major chord (or G for short) and we can see that it cover the sixth, fifth, and first string.  It is this sixth and first-string stretch that makes this chord a bit difficult at first to learn.

The E major chord is played on the fifth, fourth, and third-string.  At the first and second frets.  This is a great chord because all the notes are close together and reside on only two frets. 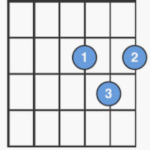 This is a great chord in the fact that it is in the shape of a triangle.  Three notes on the third, second, and first strings.  It is probably the most popular out of all five chords.

Why these chords are so popular

The reason why these chords are so popular is they are most common in many, many songs.  What is also great is that the E and the A chord can be substituted for their minor counterpart.  The E minor and the A minor. 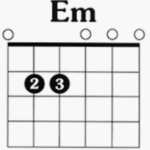 The E minor chord is probably the easiest chord out of all the natural chords to play.  Why?  Because it only requires two fingers, as you can see from the chord diagram.

you just take your index finger off the 1st fret third string from the E major and you have the E minor.  Very simple and easy to transition from. 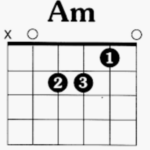 A minor is a great chord as well because if you look at it closely, you can see that it is the same shape as the E major.  The only difference is that it is located on the fourth, third, and second strings.

This is a great chord as well because it is an easy transition from the E major.  All you need to do is drop all your fingers down a string.  This will also give you a different sound than the A major chord.

Keep things simple to start and focus on developing the fundamentals.  This will allow you to build a solid foundation.  And if more help is needed, I recommend you check out my guitar method books I have on Amazon.

These are written in an easy to learn, step-by-step method to get you moving quickly in the direction desired.  They are packed with chord diagrams and some have full-color pictures for easy understanding of musical concepts.  As well as the opportunity to email me if any help is needed with any of the lessons.

Learn these 5 common chords and you’ll be able to play hundreds of songs.  Be sure to follow me on Social Media for my latest lesson updates and practice every day for maximum efficiency. 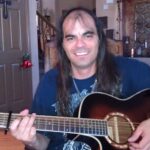