Dwayne Jenkins Posted on February 26, 2019 Posted in Guitar Solos, Music Theory Tagged with how to play lead guitar, how to play the blues 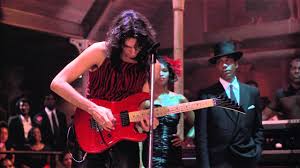 In today’s lesson, we are going to learn how to understand music notation, the 12 bar blues, and lead guitar riffs so that we can use this to create guitar solos.  Because these three elements are widely used in playing guitar and creating jaw-dropping guitar solos.

Rhythm is the foundation of the song and does require discipline as well and a different set of skills to get down proficiently but the lead guitar is a little bit more.  That is why it gets the spotlight.  Very much like a quarterback of a football team.  The other positions are just as important (right guard, receiver, running back, etc) but it is the quarterback’s position that requires more study.

In this lesson of the book Lead Guitar Wizardry, we are going to be looking at the fundamental principles of how to play lead guitar. How to understand music notation, the 12 bar blues, and lead guitar riffs. These are the elements that you want to study to get familiar with playing guitar solos.

Why learn other people’s solos?

It is a great idea to learn guitar solos from your favorite players because it teaches you many things.  Guitar solos are harder than rhythm because rhythm repeats itself many times throughout the song so it sticks in your mind easier, as where guitar solos usually come through just once.  And because of this, they are much harder to master and remember.  That’s why it is important to keep your fingers in shape.

This is because they are a song within a song and that is why they get the spotlight.  When starting out playing lead guitar it is recommended by me that you start out playing solos from your favorite players so that you learn how they are constructed.  How the elements of guitar solos are put together.

This also gives you insight on how you can use these secret elements to create your own solo of wizardry.  But in order to do so, you need to learn the fundamental principles of how they are put together.  Very much like baking a cake.  You wouldn’t just throw ingredients together.  You would mix and match them in a certain way at certain intervals.  The same goes for guitar solos.

In the tablature example below we have 6 lines that represent the 6 guitar strings.  The only thing is that the bottom line will represent your biggest string which is on top of your guitar (see video lesson) and the reason for this is that in the written word, the lowest note is always on the bottom.  So you’ll have to remember this when reading the sheet music.

Tablature is great because it is designed specifically for guitar players so it is a lot easier to read than standard notation (which is for any instrument) once you get the hang of it.  Hence this lesson on how to read it.  With tablature, we will be working with numbers instead of symbols.

Open means that we do not put a finger down on the fretboard.  we just play the string by itself.  This is called open and is represented as such in the diagram.  So as we can see, we play on the strings and frets and the notation will indicate these two things.  Which string we ate on and what fret we are playing.

As time goes on this notation will get more complex as we learn songs but that’s ok because I will be here to help you figure it out.  So with all that being said, just take some time to wrap this concept around your brain and it will all make sense as we progress with this sacred study.

All western music is made up of 12 notes.  These 12 notes make up the musical alphabet and it is what all musical concepts come out of.  Major, minor chords and all different types of scales.  When it comes to chords and scales there are thousands of them we could create.  Crazy huh?  I know.  But we don’t need to learn that many, just the most common ones to start.  So let’s look at these 12 notes that we will create all our musical recipes from.

All musical concepts will be derived from these 12 notes so make sure to get these memorized because they are the magical properties that you will be using to create your lead guitar wizardry magic.  These are what you will need to know to create your major scale, and your minor pentatonic scale to start off with.

The 12 bar blues is very important to learn because it provides a starting point progression to solo over.  It is a three-chord musical rhythm progression that is widely used to sing and solo over.  The reason why it is so popular is that when you listen to it you can tell where it is going before it even gets there.

These are three chords that go together well in any key and that is why it is important to learn them.  As you head down the journey of lead guitar wizardry, you will see what I’m talking about and it will begin to make more sense.  For now, just learn this concept and you’ll be ok.

These are another thing that you want to get started on as these will provide the foundation for your guitar soloing as well.  Lead guitar riffs.  These are a perfect thing to play over the 12 bar blues progression that we talked about in the last paragraph.

If we stick with the key of A minor, this is the first part of the lead guitar riff that you would play over the first chord.

As you can see, this is played over 12 bars of music. and that is why it is called a 12 bar blues lead guitar riff. I recommend you practice this, play each section for the number of times I have described and you will hear how it sounds and recognize how it works.

If you do this, it will give you the building blocks for setting up a solid foundation for becoming a lead guitar wizard.  And that is what this training is all about.

Now that you have all that down practice, practice, practice!  Study.  build up your practice routine, study the notation.  Learn your notes and get familiar with the 12 bar blues lead guitar riff.  You should already be familiar with the 12 bar progression.  If not, no worries go back and learn it and the lead guitar riff that is presented to play over it will all make sense.

Thanks so much for your time being here reading, learning and allowing me the opportunity to teach you.  And if you haven’t already, be sure to grab my FREE action-guide “Guitar Solo Secrets” to help take your understanding of guitar solos to the next level.  If you have any questions about anything in this lesson or anything else your learning, feel free to contact me.

Best of luck and till the next lesson, take care.