How To Read And Play Power Chords 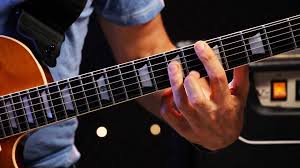 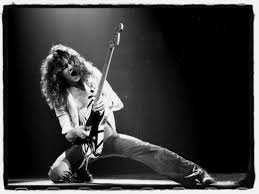 How to read and play power chords is one of the most important things to work on when learning guitar. Chords are essential to playing guitar and that’s why it’s best to start with open & closed power chords.

These chords can help get you started with the least amount of discomfort.  When it comes to chords, thousands of them can be played on the guitar.

Crazy huh?  I know.  Who would have thought?  Anyway,  it’s not necessary to learn them all.  Just a few will get you headed in the right direction.  That is why we look to open & closed power chords.

What Are Power Chords?

These are chords that stay the same shape once you learn to form them.  The open power chords all stay at the second fret while the closed power chords allow you to move up & down the fretboard.

♦  Play the chords clearly and visualize the chord patterns

The first chord we will work on is the Em chord. Look at the diagram below. 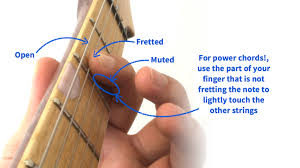 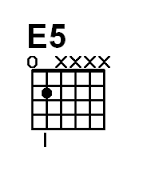 Open power chords are the easiest chord to play because it is played with one finger.  The guitar neck is facing upward and the strings are from left to right (6-1) Biggest string to the far left, smallest string to the right.  If you have a problem understanding this, view my post on how to read chord charts.

In this diagram, you place your first finger on the 5th string second fret and strum the top two strings.  This is called an open E chord. The reason for this is because when you play a string without putting a finger on it, it’s called “open”   In this example, the 6th string (E) is not being fretted, therefore, is open so the chord is called an “open E chord”

Now if you place your finger one string down on the 4th string (same fret) and strum the 5th and 4th string you will now be playing an open A chord.  Same reason as above.  The 5th string (A) is being played open and the fourth string is being fretted at the 2nd fret. 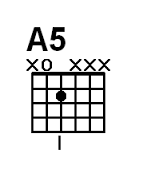 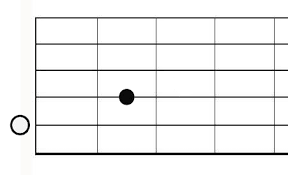 As you can see the chord is the same as above, just one string down.  Instead of playing the 6th and 5th string you are now playing the 5th and 4th string.  In the picture above, you can also read the chord facing sideways.

This is a very good way to start building your chord vocabulary because they are played with 1 finger and you just strum 2 strings.  Learn to read how this is written & thoroughly understand it, and you will reap some great rewards.

These kinds of chords are very popular in rock music. These types of chords are called Open Chords because one of the strings being played is open. Meaning that you do not put your finger on it as the diagrams to the left note.

Also, notice the diagram shows a 0 for the string being played open.  The x means the string is not to be played.  Now let’s move on to the two-note chord.  The Power Chord! After you learn how to read and play easy 1 note chords you can move on to easy 2 note chords.

Eventually, you will move on to 3 and 4 note chords but that’ll be for later.  For right now lets stick with 2 note chords.  The example below shows a diagram of a two-note chord.  Two fingers on 2 strings with a fret in between. 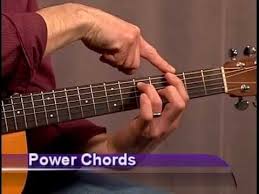 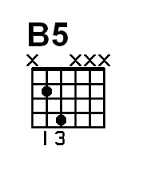 As you can see you are now playing 2 strings.  The picture above shows how the chord is formed.  It’s just up a fret so it’s playing a C chord.  But it’s there for reference.  One of the 5th string 2nd fret and one on the 4th string 4th fret.  This chord is usually played with the 1st and 3rd fingers, but you can also use the 1st and 4th if it’s easier for you.

Power chords are a bit harder to form than the open chord because they require two fingers instead of just one, but that’s the whole point.  You’re progressing from using one finger to using two.  Be sure to spread out your fingers & watch for spacing.

The Benefit Of Playing Power Chords

What’s great about the power chord shape is that it always stays the same.  This is called a 2 note Power Chord.  What’s a Power Chord you ask?  It is a simple 2 note chord that has a lot of power behind it when played properly.  Especially when you play with hi-gain or distortion.

This chord type is very popular and once you learn it you can play many, many rock songs.  So I’d recommend learning how to play these types of chords to start.  Then you can progress to playing natural chords.  These are popular as well but a bit harder to form & move.

As stated before, these are great chords for starting with and many songs can be played from learning them. If you feel you are having difficulties with them, email me and I will do my best to help you further.

Remember, it takes time and effort to learn guitar and you must be patient. Take your time and don’t get frustrated.  Playing music is a lot of fun once you get it down and like anything else, there is a learning curve.  Go through the learning curve and you will come out a victor.

And if you haven’t already, I recommend that you grab my FREE action-guide “Rhythm Guitar Secrets”  for insider tips to excel your guitar playing.

Until the next lesson, take care. 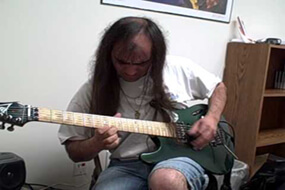