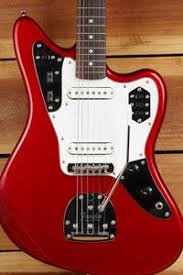 The Fender Squire Vintage Modified Jaguar Electric Guitar story starts awhile earlier when a man named Leo Fender came on to the music scene.  Who had a dream to do with guitars what Henry Ford did with cars?  To mass-produce them so that everyone could afford one.  And that one would be a Fender.

I believe this has been accomplished.

The Fender Jaguar first came out in 1962 as Leo Fender’s top of the line guitar.  Taken from the roots of the Jazzmaster, it was characterized by the offset body. an unusual switching system with circuits that were separated for playing both rhythm guitar and lead guitar.  Not to mention knobs and strange rollers.  It was at the time and still is today a very original design.

During its initial 13 years in production despite different modifications, it never sold as well as the less expensive Stratocaster & Telecaster.  This has been the bread & butter for Fender since their invention.  The Stratocaster is still one of the most popular model guitars sold in the world today!

Where It Found Its Home

Where the original Fender Jaguar from 62 found its home was in the surf music scene.  It seemed that it was designed for this style of music.  As the surf rockers seemed to feel it fit them.  Here the guitar seemed to flow with action.  But sadly, being that it did not sell as well as expected it was discontinued in 1975.  Many years later these guitars started to become popular again.  But this time with American punk & indie-rockers. 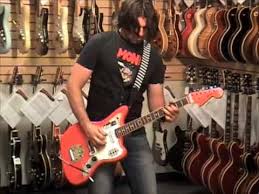 Punk rockers & alternative rockers started leaning toward these now vintage guitars.  The Jaguars contributed to these indie rock movements that were popularized in the late ’80s & early ’90s. These guitars helped to propel this new style of music just it had done earlier with surf music.

The reason why the guitar was appealing to these musicians was that the Fender Jaguar was out of style with the mainstream (very appealing to a 90’s rocker) and being so it was cheaper than other guitars in its class.  This allowed indie rockers to create an artistic vision that connected with the masses at an affordable cost.

Seeing the rise in the popularity of this guitar & how it was fueling a new style of music, Fender decided to start making them in Japan in the 1980s to see if they could capture on this new fame that the Jaguar was now acquiring. The production line proved a success and so they introduced a USA-made reissue in 1999.  The lower end Japanese models were made from 1984-2015.

The Squier Vintage Modified Jaguar Electric Guitar gives you authentic style & originality at an affordable price.  The guitar has a very comfortable lightweight body that is designed for ease of playing with

These pickups are great in the fact that they can give you a nice clean ring but then get nasty hard when you push them.  This allows for more diversity in your overall tone & playing.

When you pick up the guitar to play it, it doesn’t take long to realize that you are playing something special.  With its sleek design and onboard tone options, your inspiration can be sparked many times over in many different directions.  From crystal clean tones to nitty-gritty grind, the Squire Vintage Modified Jaguar can do it and everything in between.

This Is A Vintage-Inspired Hot Rod Of A Guitar!

What is special & unique about the Squire Jaquire is its Jaguar switching system.  Designed to get the most out of two Duncan Designed single-coil pickups that work in total harmony with this system.  This allows the guitar to produce a superb assortment of sound colors that can be mixed and matched to create the most beautiful artistic expression.

With the neck slightly shorter than most & a rosewood fretboard, your playing will develop skills you never knew you had due to these two factors.  And although the original body shape with its offset design was considered “radical” for its time, now many years later it is being hailed for its comfort.  A design that seems to fit no matter if you are sitting down studying or standing up performing.  This guitar has got you covered both ways.

This series was designed to tap into history by modifying new guitars with old guitar features.  Meanwhile being constructed of the highest grade components & Top shelf engineering.  Not to mention the fabulous intricate finish.  The vintage modified series has it all.  The looks, the style & the classic sound.

It appears to me that Leo was on to something that was ahead of its time.  This happens to many ideas that hit the market.  Same thing with Gibson’s Explorer guitar.  Not well received at the time of its inception, but over the years has grown a cult following much like the Fender Jaguar.

For me, I give the Jaguar a thumbs up for its innovation in design  & variety of sonic sounds one can make due to its “special switching system”  that is original & unique to the Jaguar.  If you want 60’s surf rock, grab a Jag plug into a Fender amp, turn the reverb up all the way & you are ready to go.  Surf rock tone at its finest.

But then again, if you like the indie rock of the nineties then this can also be your go-to guitar.  It has been played by many famous contributors to this generation.  Here you can get both the crystal clean tones but also get the down & dirty tones this music is known for.

Either way, the Fender Squire Vintage Modified Jaguar Electric Guitar can be your best friend.

If you are looking to inject some inspiration into your playing, the Squire Jaguar will do the trick.  Start playing more, having fun more & enjoying your personal ability enhancement.

And if you are looking to add to your self-expression check out the Dunlop Crybaby Wah Pedal.  It is a very cool effect that helps take your playing to new places.  Check out my lesson on that.  And if your thinking about possibly purchasing a jaguar.  Vintage Jaguars sell for many times their original price. you can learn more here.

Until next time, take care.